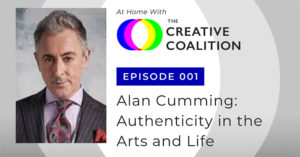 Alan Cumming, O.B.E., is a brilliantly multi-talented Scottish–American actor. He is also a comedian, singer, writer, filmmaker, and activist who has appeared in numerous films, television shows, and plays during his career, which began at the age of 16. He has won a Tony award and has been nominated for Emmys and Golden Globes, as well having received more than 40 awards for his humanitarianism and social activism. He is the author of five books, including the #1 New York Times bestselling memoir, “Not My Father’s Son,” which details growing up with an abusive father and the impact this had on his life.

What You’ll Learn from This Episode:

Featured on the Show: